That Role Playing is a small mixed genre game. It combines a classic computer RPG and Roguelike aesthetics with a real-time Action and a Strategic resources management along an Adventure mission that takes place in a philosophical Fantasy setting. In addition to a limited number of obligatory combats against several kinds of Monsters, which are based on planning of attacks with retaliation strikes, the game also has a bunch of guess-what-it-is textual Puzzles and plenty of Secrets to solve and reveal. You play as the Hero, who travelled far to find and retrieve Seven Crystals of Light and return back to his home Kingdom.

Despite intentionally simplified graphics, the game contains interesting archetypic visuals, smoothly appearing as player explores the Territory, plus really good Music and Sounds effects, and also a special kinesthetic sense to every movement and action.

"In a sinister days, when the darkness condensed in tricking all of us, only the Light of our Souls and clear-eyed Consciousness could serve well to save the people of The Fantasy Kingdom. Once again — a brave and skilful knight — sets forth in a quest to find the legendary seven Crystals of Light, with a strong will to return alive and unspoiled, to help the Mother Land... Journey onward and let the Life force be with us!"

The game grants you a chance to dive into retro-stylized adventure in a far march to collect all essential artifacts and find a way to return back. The title That Role Playing itself is a reference to pen & graph paper game created by the author. The basic strategy element and the key to victory here is a watchful and chary usage of available resources.

There are also a lot of hidden jokes and secrets, The Mystery experience and even more hard problem to return back after many more monsters spawn — not by chance or agility, but by precisely right actions.

The game turned out to be really challenging for casual players for its textual puzzles (not shown in the trailer) and tricky combat issues (like retaliation strikes from monsters). There were also complaints about an intentional absence of Esc menu and How to Play instructions. All those were added in v1.77 a month later (21 Nov 2021). 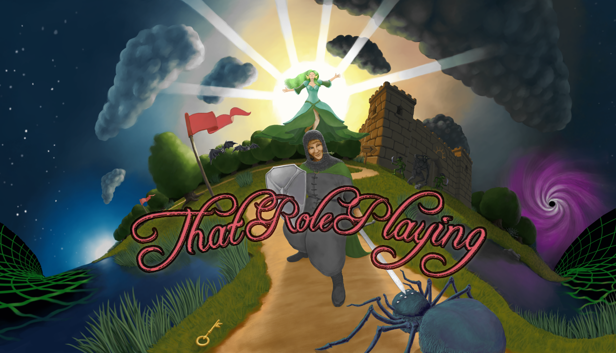